A Southern California native, Annette made her mark as a nationally recognized sales and marketing manager for one of the top beauty distributors on the West Coast. Armed with a strong work ethic that she learned from her mother, she worked hard climbing the corporate ladder to achieve success. When her first child turned two, she decided to 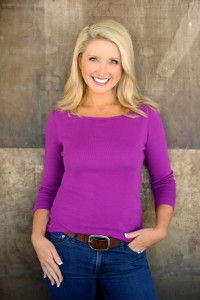 leave that fast paced career. For the first time in her life she found that she had free time. She took a few commercial classes and began her second career in the entertainment industry.

For the first two years she booked a lot of commercials. She was then drawn to the hosting world and began working on infomercials, direct response campaigns, live events and more. A friend suggested she pursue commercial print modeling, something she had never considered, especially being 5’7” and in the “older” category. To her surprise and delight, she loved it! And now more than twelve years later, and well into her 40’s, she is still loving it. In the last decade she had two more children and have been able to work part-time while still being a full-time mom.

Her hosting resume includes in-studio, red-carpet, celebrity interviews, infomercials, direct response, on-air live shopping shows and live events for a variety of clients, nationally and internationally. She also had the honor of playing one of the heroes in the Emmy nominated docudrama “The Flight That Fought Back.”

Since opening The Model Consultant to the public in 2015, Annette has launched numerous models of all ages nationwide. Her services quickly expanded to include commercial actors, hosts, agencies, agents, photographers and a variety of industry professionals. Her eye for talent also positioned her to cast a few projects with results beyond expectations. She is also a judge for an international beauty/talent competition.

In October 2016 – after consulting Naturally Fit Agency Texas for over a year – Annette teamed up with them to open their California office which officially launched in January 2017 and quickly attracted the top fitness talent, pro athletes commercials and Influencers in the state under Annette’s leadership as the West Coast Agency Director. In 2019 Annette expanded her agency to include a lucrative influencer division. *Please note Annette does NOT consult fitness models in California.

In July 2017 Annette expanded her services to Europe with a second home base in Ireland. See the Ireland page for more information.

View a sample of my commercial print work by clicking here.